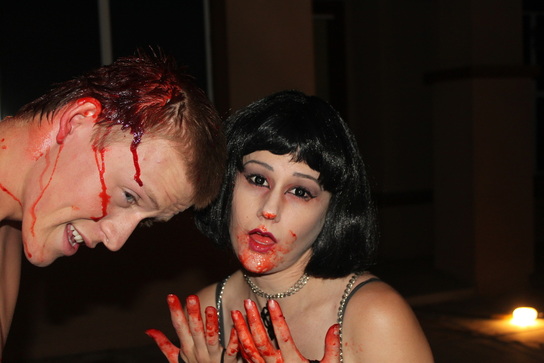 In Banning, zombies, from a zombie's point of view by David Heiss

Braaaaiiinsss.
That, typically, is what zombies crave, isn’t it?
The zombies in a series of six Web-isodes, “Chronicles of the Dead” — the first one was released last week — are not your stereotypical zombies, its producers explain.
“Our zombies are a hybrid,” according to John Marshall, of Hemet, who helped produce, direct, and write episodes of “Chronicles of the Dead,” with lead writer, Monica Bryant, of Banning, CA. The “Chronicles” zombies are a combination of “the traditional voodoo zombies, modern-day infected zombies, and ‘Dawn of the Dead’ zombies where frenzied zombies run around and eat you.”
For those who are not fluent with zombie lore, Marshall gives a basic overview.
Voodoo zombies are the original zombies, created when witches cast spells on a person and rendered them soul-less and lifeless, to bumble along and do their captor’s bidding.
Infected zombies, their history based more in “science,” depict a person whose brain becomes infected with some affliction or virus that mirrors the effects of rabies, killing a person and bringing them back to “life” with a zest for brains, and an urge to feast on human flesh.
And, all zombie experts know, that the cult classic “Dawn of the Dead” changed the rules a bit, since it portrays zombies as simply wanting to eat people for no particular reason (they’re not necessarily infected, under the control of a voodoo spellcaster, etc.). They just attack humans for consumption.
In zombie movies, the main character is trying to escape being attacked, infected or devoured.
In “Chronicles of the Dead,” the perspective is produced from the zombies’ point of view: instead of people coming together and hating zombies, “Marshall explains, “they’re coming together because they are zombies — and they need help.”
The series is based on a 167-page novel that Bryant is hoping to get published someday. The book, she explains, “has a lot more details of what it’s like to be a zombie: the body’s stiff, the blood’s not flowing, the heart’s not beating.”
The cast is entirely made up of fellow Mt. San Jacinto College students, recruited from film classes.
The first episode aired on their website and had just under 50 hits in its first afternoon.
Shannon Elizabeth Smith, who plays the lead character Sarah Daniels, had worked with director Marshall on other projects.
“She is a complex character,” Smith explains. “You don’t learn too much about her in the first episode. One thing you do know: she is infected, and has been for some time.”
While the story itself takes place in San Bernardino County, local scenes around Banning are recognizable in some of the footage. Filming took place all around the southland, as far as Hemet and Wildomar.
Spectators can expect a minimum of six completed Webisodes, between four and six minutes long. They debuted with their first one on Aug. 30, and a new one will air each week.
The pilot, which is online, “is very different from the first episode,” though they will be very similar in plot, Marshall says. “The first time, it was a lot of our friends working with us,” which poses unforeseen challenges, especially when it comes to filming schedules — it’s hard to get a bunch of actors together, because they’re always involved in other shows and productions. For the actual series, they still used friends and acquaintances — Marshall even cast his brother as a prominent character in the first episode.

“It will be neat to see how far this goes,” he says. “I’m glad to have a starting base and an audience. I’m hoping to eventually establish a film production company and work on additional projects.”

To see more photos of the cast and production of “Chronicles of the Dead,” check out their Facebook page. 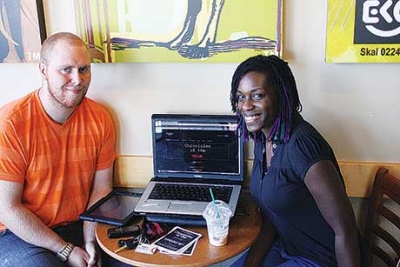 PIcture Caption: DYNAMIC DUO: MSJC students John Marshall and Monica Bryant have started a zombie-based web series titled “Chronicles of the Dead.” ------ JESSICA SELF/ The Valley Chronicle
"Our zombies are not like the usual rotten corpse. They can walk around and look like anyone. I think that is what makes this series different than shows likes 'The Walking Dead.'"

Zombies are taking over the San Jacinto Valley. At least, that is what two former Mt. San Jacinto College students are hoping for.

Monica Bryant and John Marshall, both in their twenties, recently launched a web series titled "Chronicles of the Dead."

Bryant, a Beaumont High School graduate, and Marshall, a Hemet High graduate, both studied theater, film, and screenwriting at MSJC. The idea for the web series came from a series of dreams Bryant began having in 2009.

"I just started having all of these crazy dreams and started talking to my friends about maybe making some sort of series or novel about them," Bryant said.

"Chronicles of the Dead" has six episodes in its first season, with the series finale airing tonight, Oct. 4.

The show takes viewers on the journey of two best friends who inherit a battle between the living and the dead.

"You follow the characters from being human to getting infected to actually being a zombie," Bryant said. "There are several conflicts they have to overcome along the way. The most major is a very risky cheating scandal."

Marshall said it was important that the series did not just bank on the sensationalism of zombies, but actually developed a worth-while story.

"Our zombies are not like the usual rotten corpse. They can walk around and look like anyone. I think that is what makes this series different than shows likes 'The Walking Dead,'" Marshall said. "There is a message about faithfulness and some hidden morals in there. It is definitely a twist on the zombie tale."

Both Marshall and Bryant said they are zombie enthusiasts and have not seen anything like their work in other zombie films or series.

"We wanted to make it different," Bryant said. "The series are all my ideas shaped by my friends' input and what I learned in courses at school."

All of the actors and those who assisted in the filming of the series were MSJC students. Marshall said professors at the local college helped the duo bring their ideas to life.

"I think we definitely owe a lot to our screenwriting professor Paul Jacques," Marshall said. "Both of us took all of his classes. He was really involved and really encouraged us."

Bryant is working on three novels in the "Chronicles of the Dead" series. The first six episodes which are now online are the first half of the first novel.

"I just really hope this keeps going. I want to tell this whole story," Bryant said. "We want to use the first season as a start – a base – and just improve from here."

Both Marshall and Bryant said they hope people will watch and give them a large amount of feedback.

"We want to hear it all. We really want to know what people think so we can improve," Marshall said. "Sure we'd love to hear great feedback, but more importantly we want to know our mistakes. We aren't experts. We just have a passion for this and really want it to succeed."

To watch the "Chronicles of the Dead," visit www.youtube.com/chroniclesofthedead. You can also find them on Facebook to leave commentary regarding the series.

"You can go online and watch every episode and get caught up," Bryant said. "We definitely think it is worth watching. It is local talent shot in local places by local students."